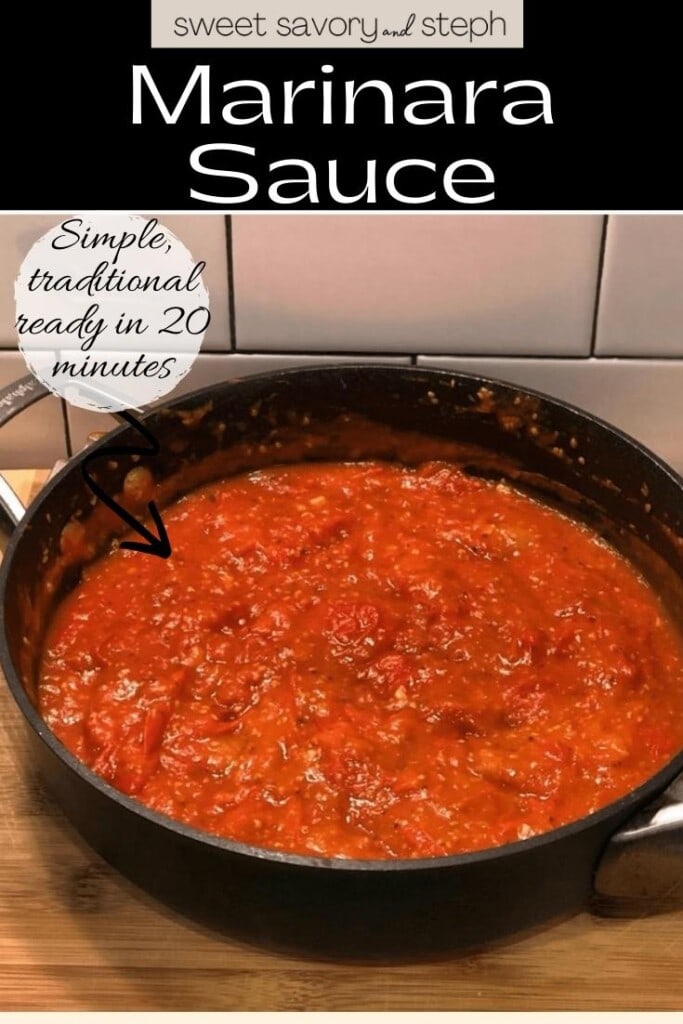 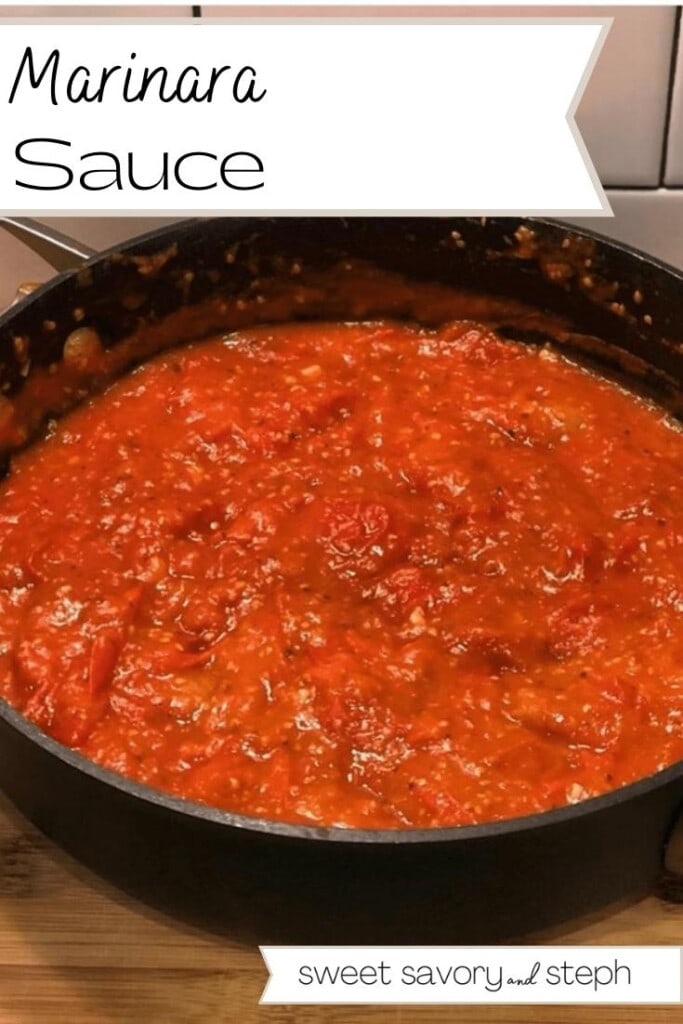 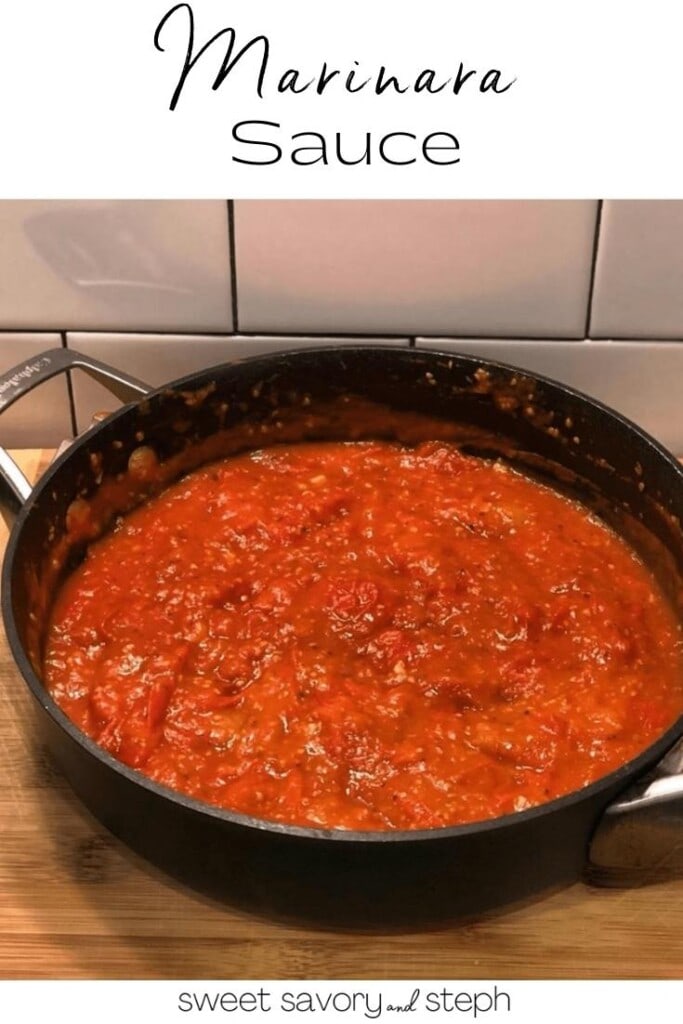 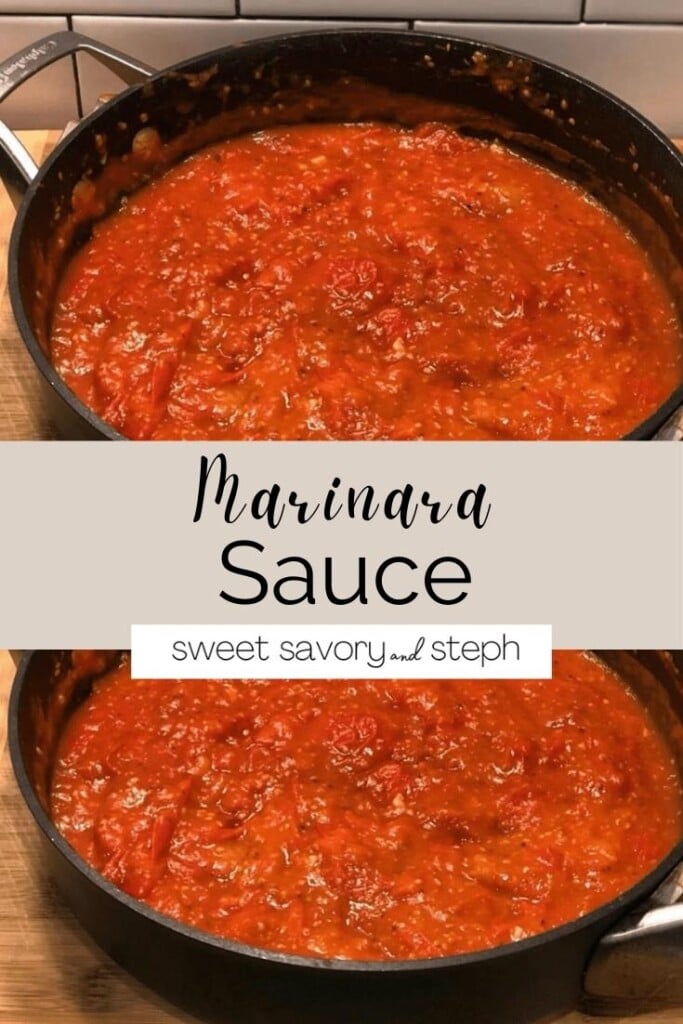 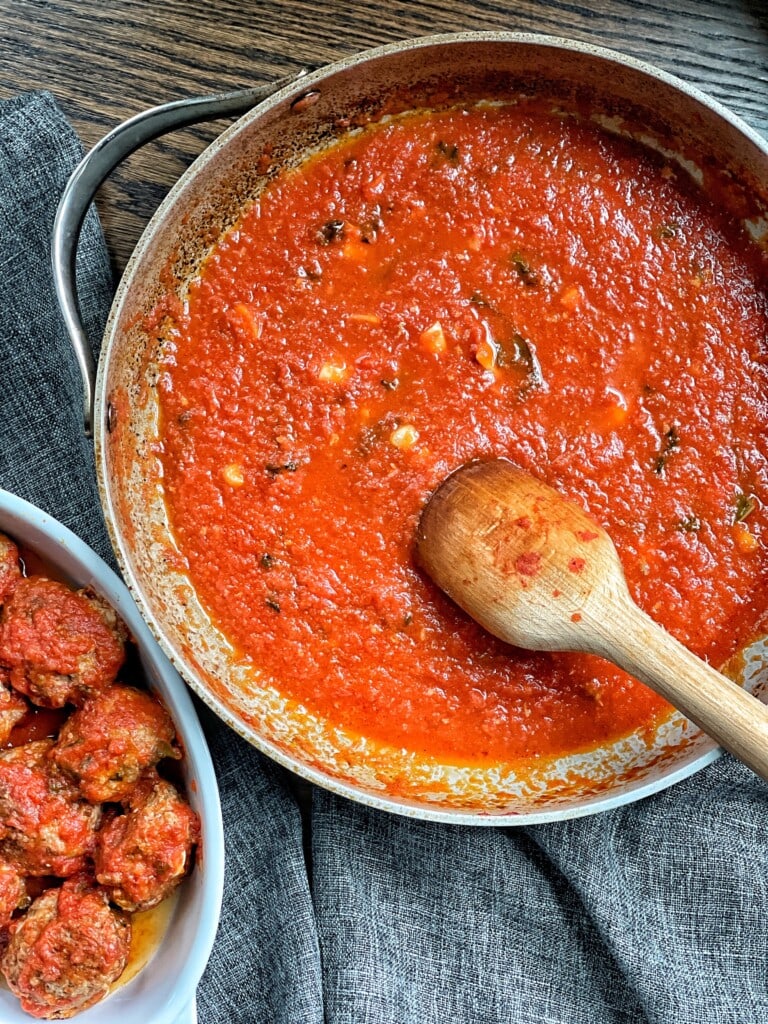 This is my recipe for the quickest, simplest, marinara sauce.  Marinara sauce is a quick pan sauce, made with garlic, olive oil, and tomatoes. Add some salt and fresh basil, and you’ve got yourself a classic, fresh marinara sauce in no time. Why buy the jar when you can do it yourself? 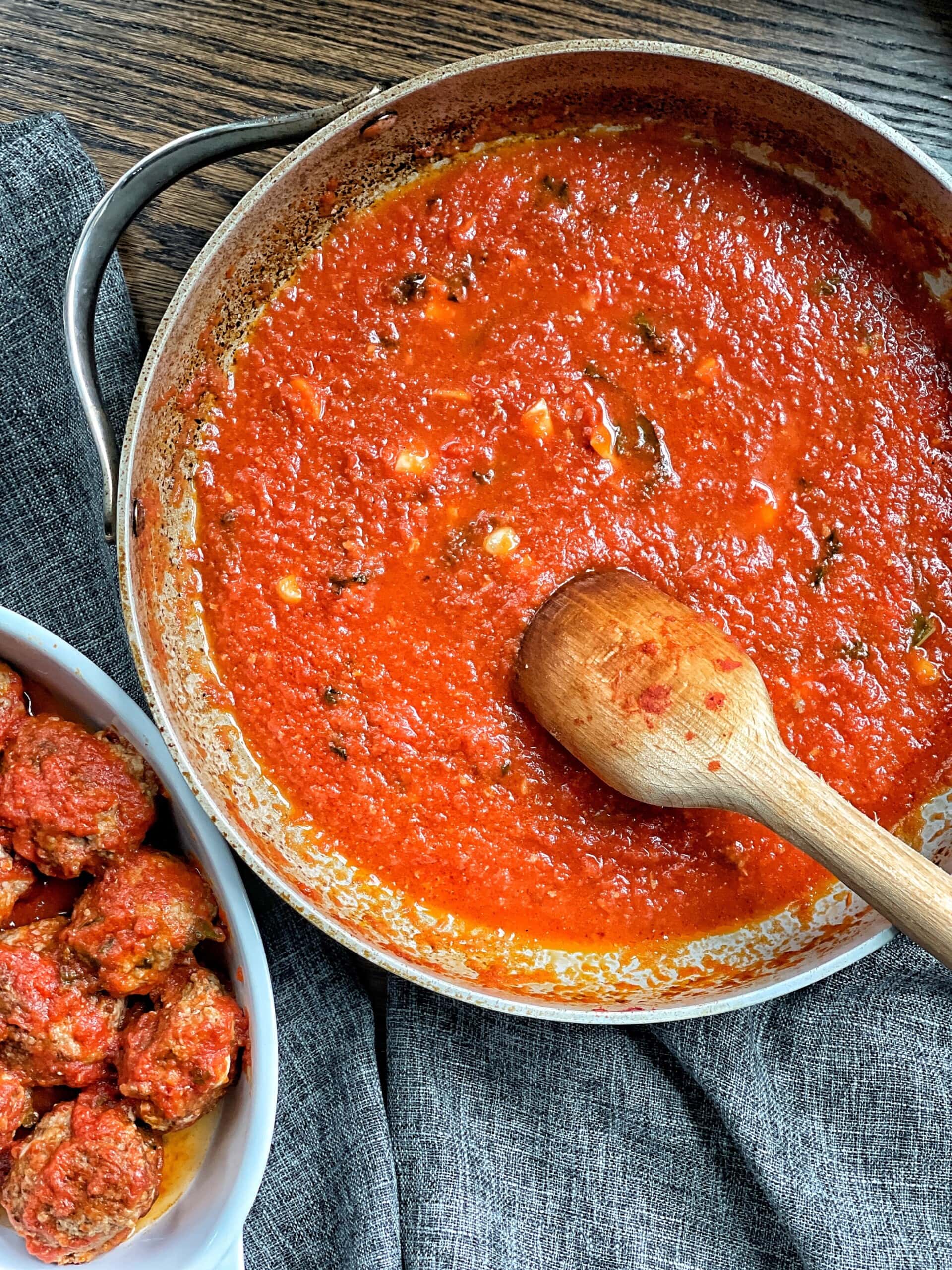 All about Marinara Sauce

This sauce is an Italian staple, but a lot of people are intimidated by the idea of making their own and resort to buying pre-made jars of marinara for convenience. I am all about making things easier in the kitchen, but jarred sauces often have hidden sugar and ingredients that marinara sauce does not traditionally have.

To be honest, when I went to write this blog post and recipe I found myself asking, “how do you explain something so simple to make?” Marinara is one of those things that doesn’t take a long time to make, and only a handful of ingredients are used.  It’s fresh, its versatile, and can be made your own with the use of any preferred added spices (Italian seasoning, dried oregano, onion).

I can promise you, marinara sauce also only takes 20 minutes (tops) to make from start to finish and requires under 5 ingredients.  You can use canned crushed tomatoes, or you can use fresh tomatoes. I have made marinara sauce with cherry tomatoes that were about to go bad in my fridge and it came out great also! 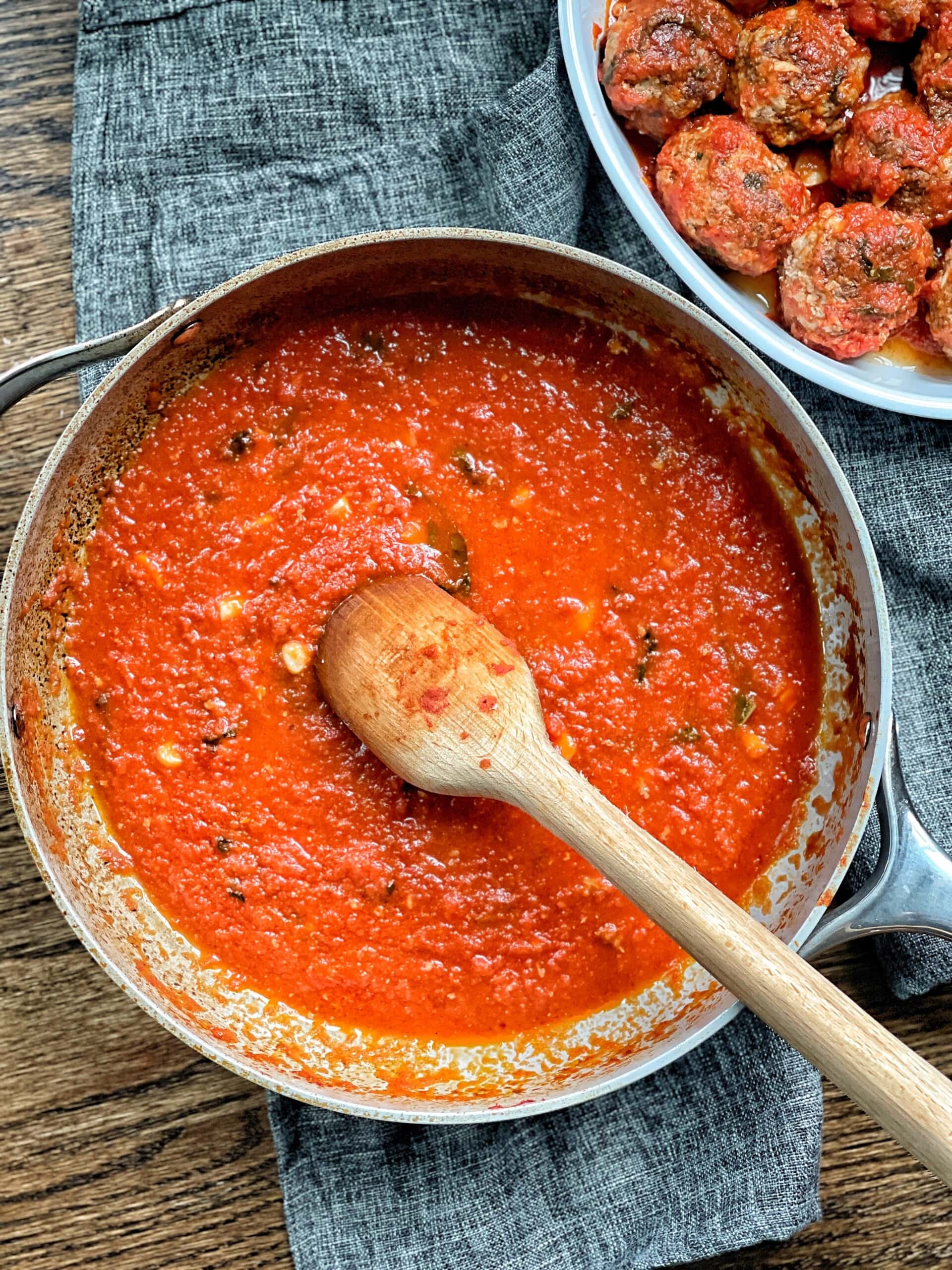 Recipes that use marinara sauce

Where do I begin? Marinara is so versatile and can be used in so many ways.  It makes the quickest weeknight dinner, when paired with pasta. But aside from the obvious uses, the following recipes also use marinara sauce:

Marinara sauce can also be used in a multitude of other recipes including to top homemade pizza!  You can also use it as a dipping sauce for your favorite treats, like mozzarella sticks or these Air Fried Stuffed Zucchini Flowers.

If you have a jar of marinara sauce already made, you can store it in the fridge and always have it on hand.  I love having a batch on hand to use with my favorite recipes!

Since I am Italian-American, my family has been in America for a while now. When they make marinara sauce, they use canned crushed tomatoes (like these) and add other ingredients. When I met my husband in 2006, I was introduced to a different world of tomato sauce. My in-laws are from towns outside of Avellino, Italy (near Naples). They came here in the 1970s and brought with them all of the traditions of Italy.

I met my husband in July, so a month later it was time for my in-laws to “do the tomatoes.” Of course, I had no idea what that meant.  Every year, they take fresh tomatoes by the bushel, wash them, boil them, run them through a press to separate the juice from the skin and pulp. This makes homemade crushed tomatoes. They jar them with salt and fresh basil, and then boil the jars to preserve them for years to come. Their entire basement is filled with jars of these tomatoes from years past. These tomatoes blow store-bought crushed tomatoes away, which is why my marinara recipe is so simple. These tomatoes really don’t need anything! Just some fresh garlic, oil, and salt.

Here’s a video of us making the crushed tomatoes this past summer.

To make marinara, it’s very simple. Just sauté some garlic in olive oil spray or a teaspoon of olive oil for a minute or until fragrant. Add the crushed tomatoes and salt.  Bring to a boil.  Simmer for 20 minutes. Add some fresh basil. Taste for seasoning.

You can also sauté onion before the garlic for some extra flavor.  You can add dried herbs like oregano, basil and parsley, or you can skip them altogether.

Before I wrote this recipe I called my mother in law and said, “how do you make marinara?” She was confused as to why I was asking her!  And this method was confirmed by her.  So it’s the real deal.  I promise!

The process is similar with this method.  You start off by sautéing some garlic in olive oil.  Next, you add in cherry tomatoes.  As the tomatoes cook, they begin to burst and break down, releasing their juices. I have a video showing step by step on how to make sauce this way.

This results in a thicker, chunkier sauce with texture.  If you don’t like the idea of that, you can use an immersion blender to make it smoother. 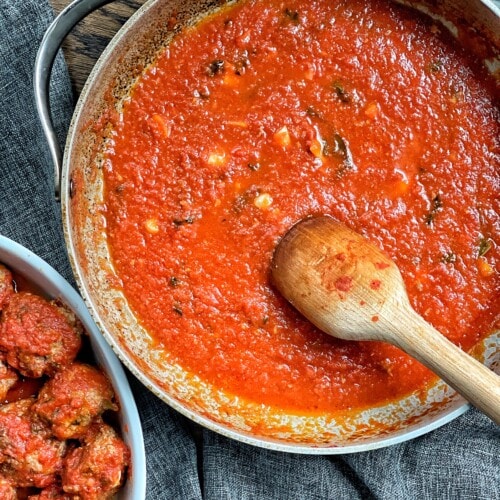 This is my recipe for the quickest, simplest, marinara sauce.  Marinara sauce is a quick pan sauce, made with garlic, olive oil, and tomatoes. Add some salt and fresh basil, and you've got yourself a classic, fresh marinara sauce in no time. Why buy the jar when you can do it yourself?
5 from 35 votes
Print Pin Rate
Course: Main Course
Cuisine: Italian
Keyword: marinara sauce, pasta sauce
Prep Time: 5 minutes
Cook Time: 20 minutes
Servings: 8
Calories: 49kcal
Author: Stephanie