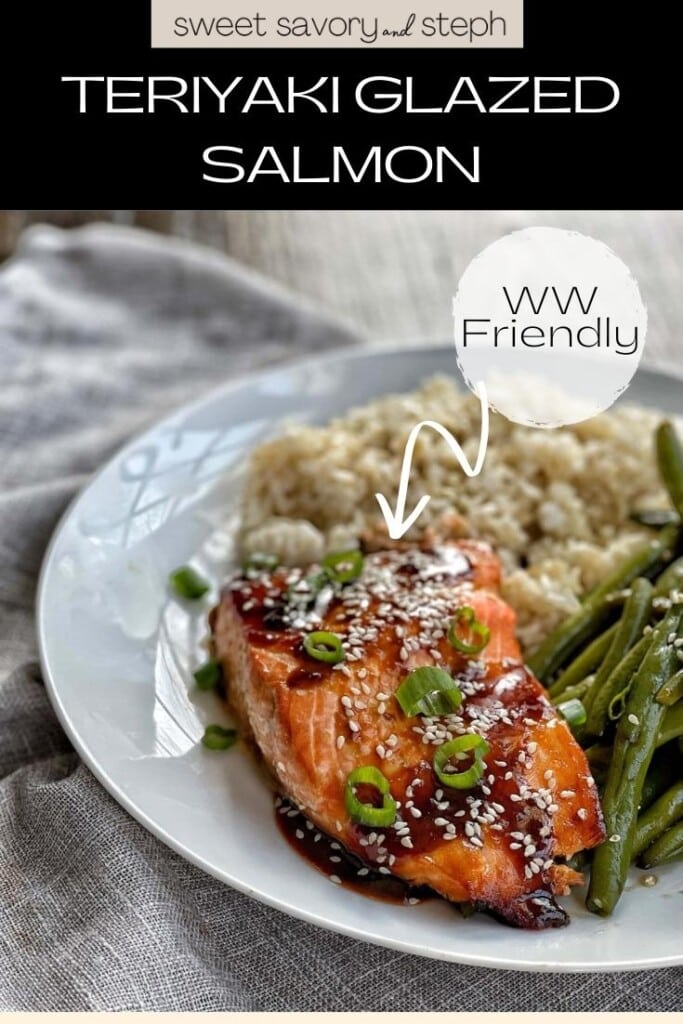 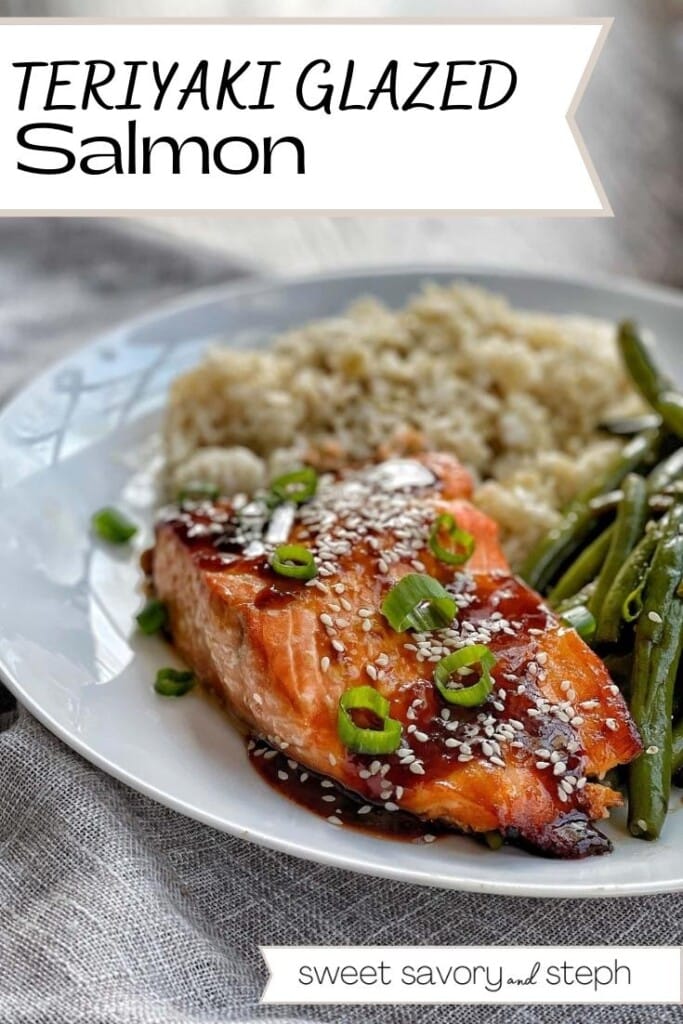 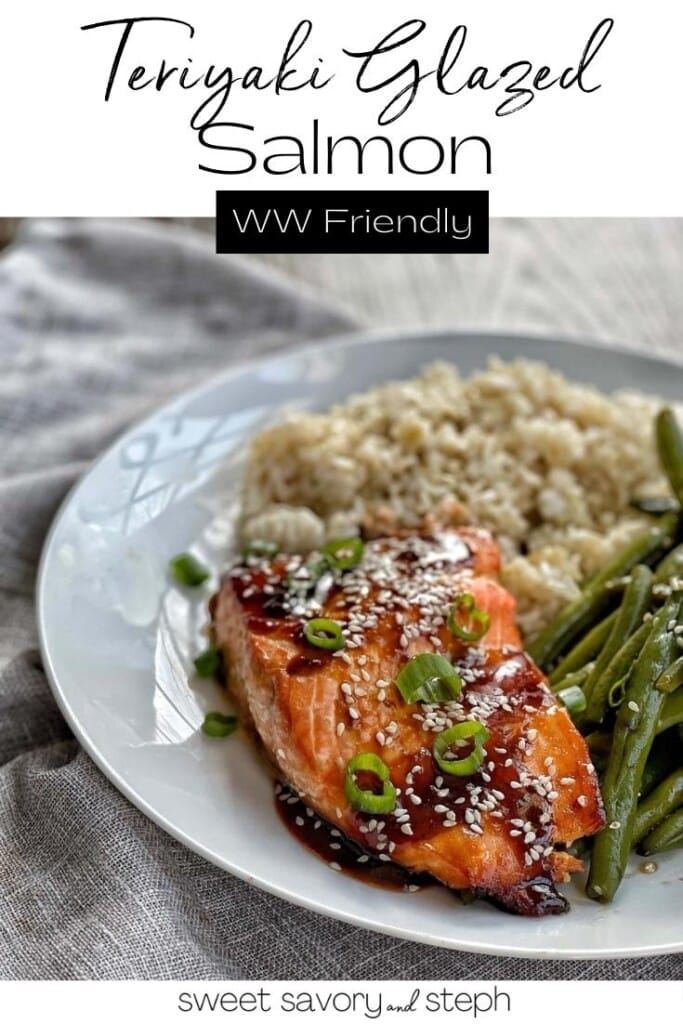 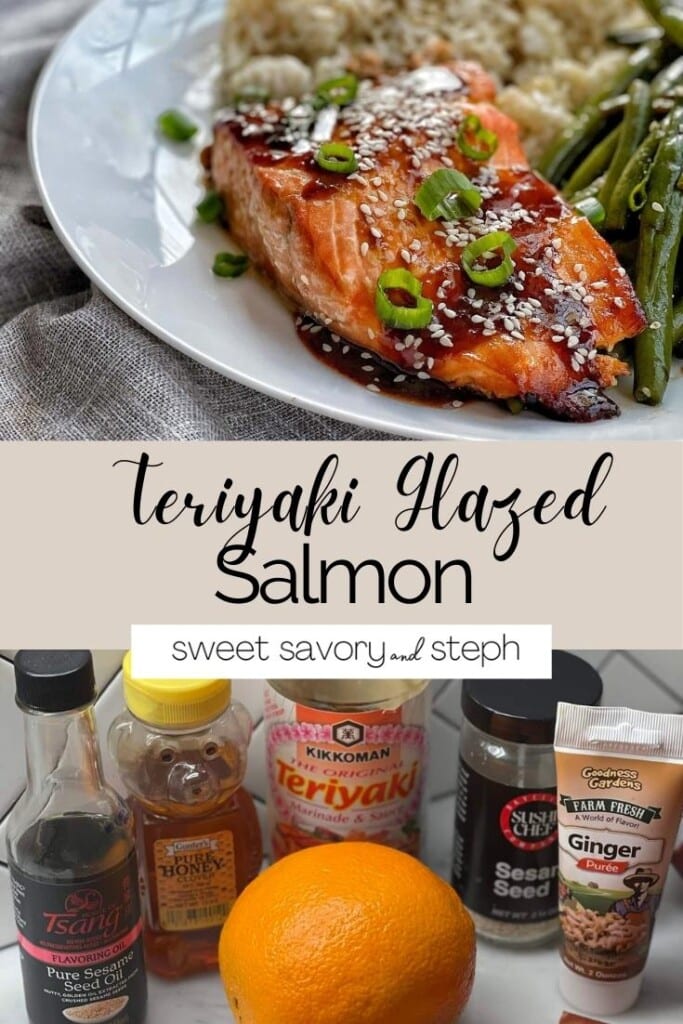 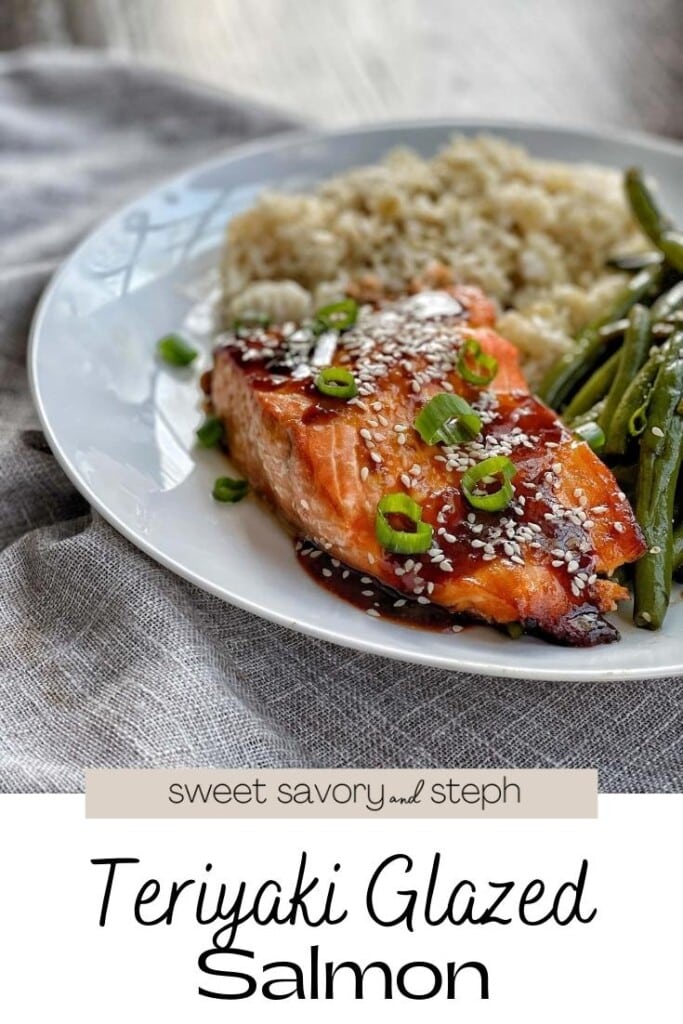 Transform salmon into a restaurant-quality dish with this teriyaki glazed salmon recipe. This recipe has the delicious flavors of teriyaki, orange, ginger and sesame. An easy marinade becomes a flavorful glaze for topping the cooked salmon; when paired with some rice and a vegetable for the ultimate meal. 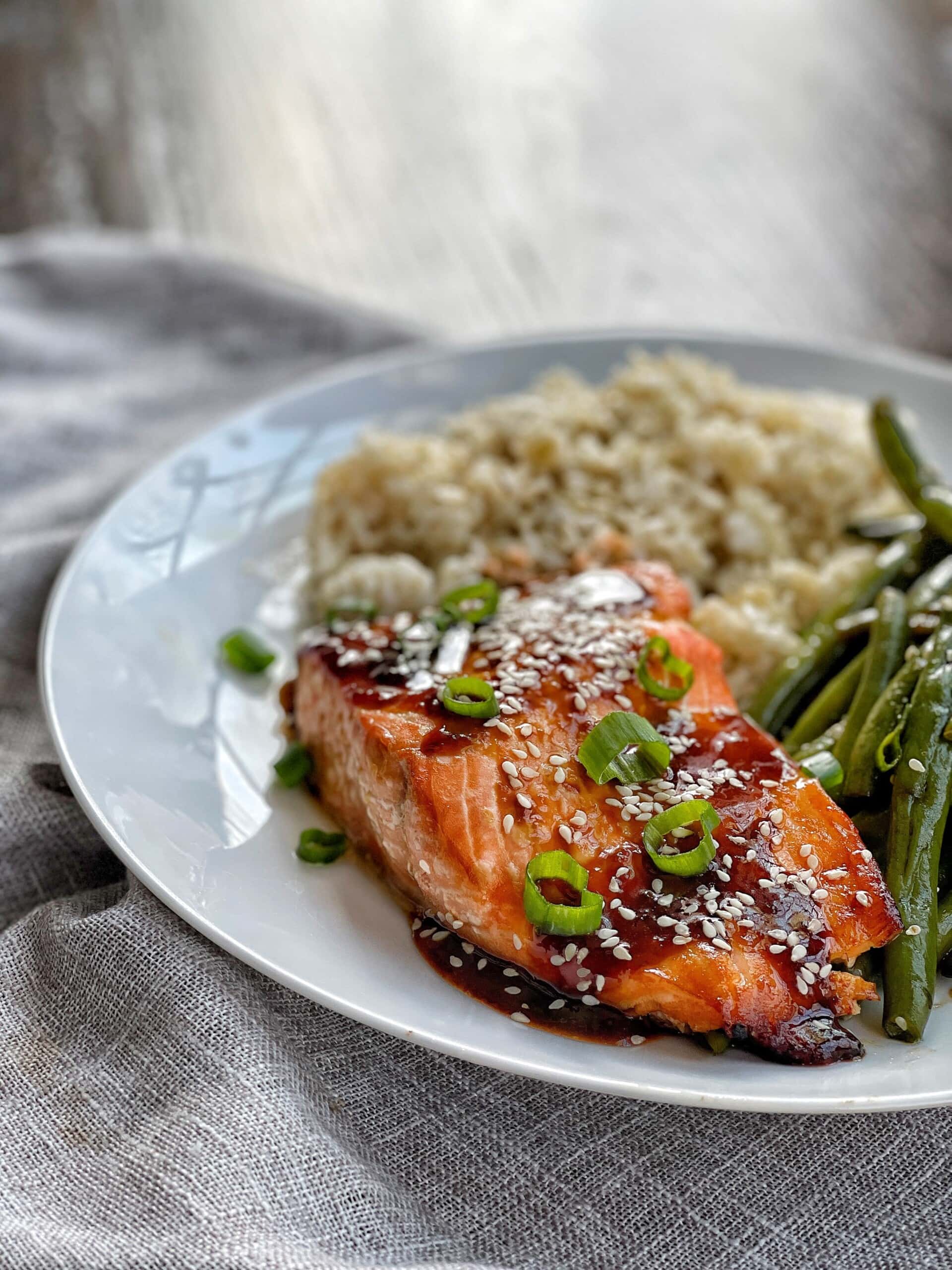 What are the benefits of eating salmon?

I am the first to admit, I always preferred other types of fish over salmon, like cod or sea bass.  When looking back, I think I just wasn’t eating salmon correctly.  After making this recipe, I actually crave salmon.  Eating this dish reminded me of eating sushi; it had all of my favorite flavors and it was anything but boring.

When I was doing research on salmon before creating this recipe, I was shocked to see the macros, as compared to other fish. The nutrition for salmon is totally different than other fish. When you think of fish, you think “lean protein,” “low fat.”  But in reality, salmon is quite the opposite!  The macros are almost close to those of a lean beef or steak.

Just to compare, 3 oz of salmon has 177 calories and 17% fat, whereas 3 oz of cod has 70 calories and less than 1% fat.  They are two totally different fish.  These figures are using basic figures from a nutritional database.  Of course, stats can vary based on the type of salmon (i.e. wild caught vs farm raised). When you are figuring out the stats for this recipe, make sure you are using the correct kind of salmon in your calculation.

But this isn’t to make you fearful of eating salmon, this is actually to encourage it.  You see, salmon has that good fat we are always talking about, and good fat keeps you fuller longer. So, salmon has the best of both words: it’s got great health benefits, it’s good for you, and it keeps you full. 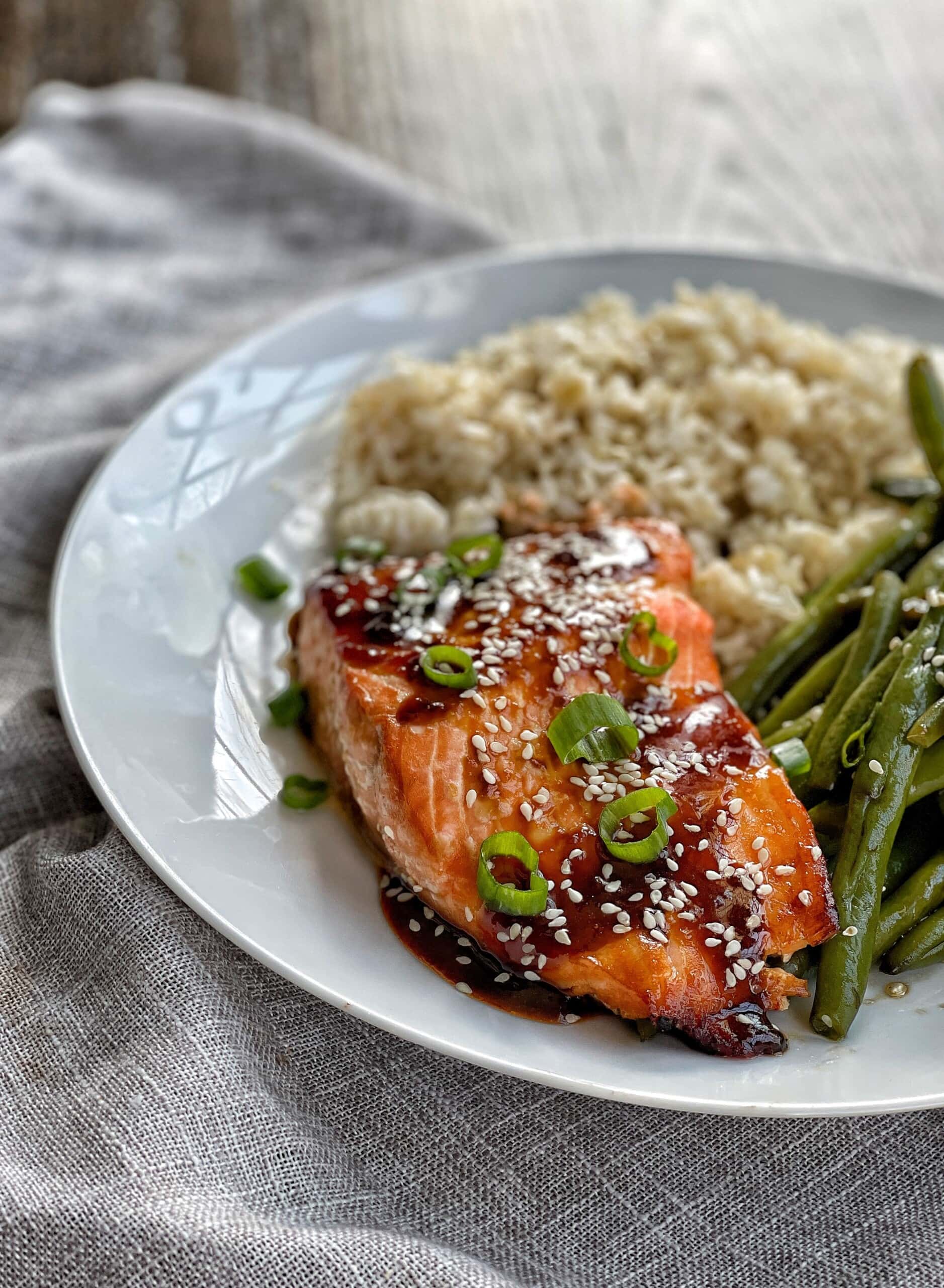 What you’ll need to make this recipe 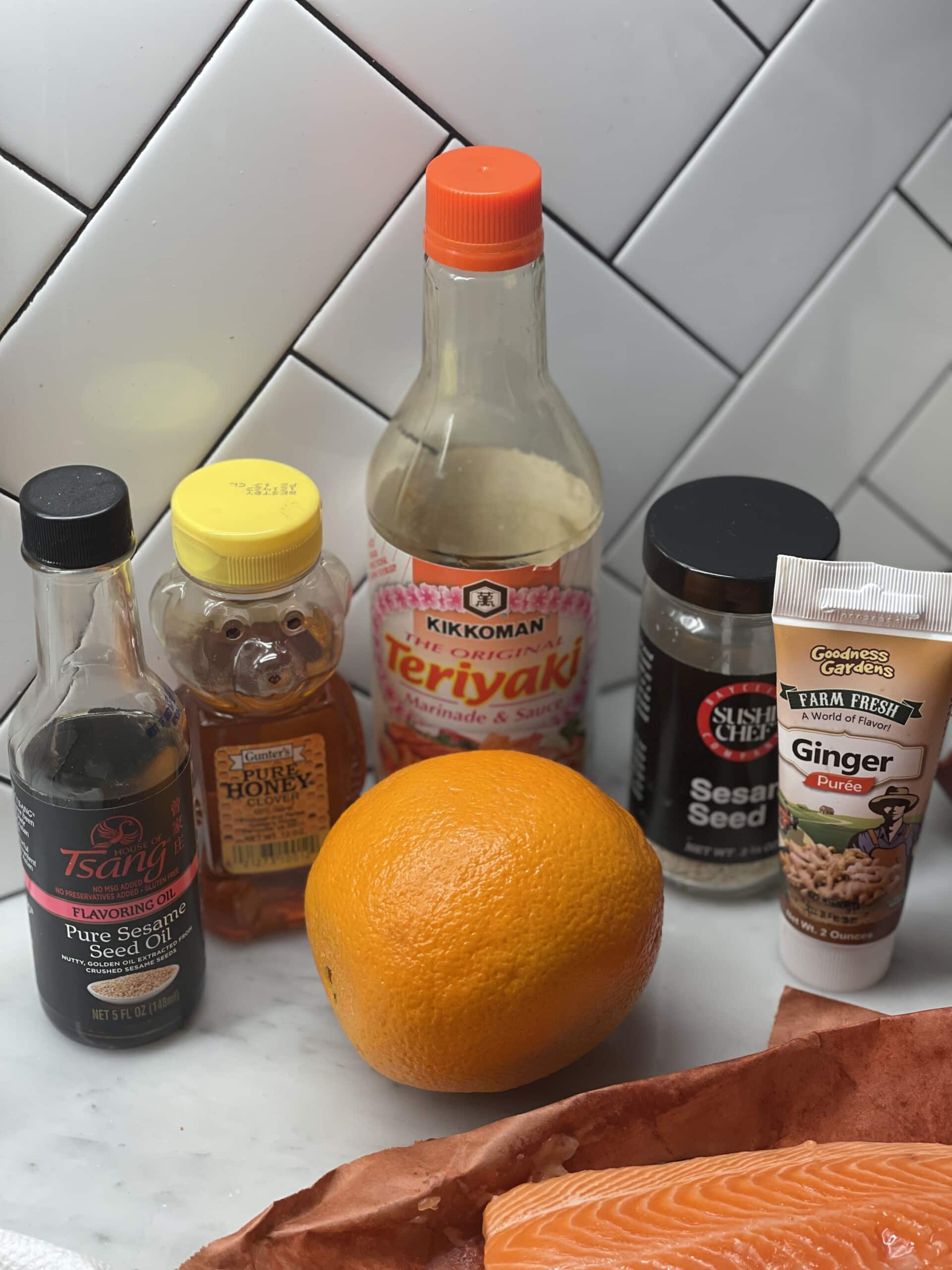 How to make the teriyaki marinade

To make the salmon super flavorful, we are going to marinate it for a few hours (a minimum of four hours is recommended here for the ultimate flavor).

The marinade is simple: combine the teriyaki, the sesame oil, the honey, and the ginger in a small bowl.  Next, zest the orange, and then cut it in half and squeeze the juice into the bowl as well. Place the salmon in a baking dish (the one you will bake it in later).  Then, top with the marinade and toss it around to coat.  Next, chop the remaining orange into segments and add those to the baking dish as well.

Cover the dish and set it in the fridge to marinate until you are ready to cook the salmon.

Cooking the salmon and making the glaze

When you are ready to cook the salmon, drain the marinade off. Pour the reserved marinade into a saucepan.  This will become the glaze later on.

Keep the salmon filets in the baking dish they marinated in, and preheat the oven to 450F.  Bake the salmon for 15-20 minutes (time will vary based on the thickness of your filets) or until the salmon is cooked through.

Meanwhile, as the salmon cooks, bring the reserved marinade to a boil in the saucepan.  Once boiling, reduce to simmer and simmer for five minutes, or until the marinade reduces to a glaze. 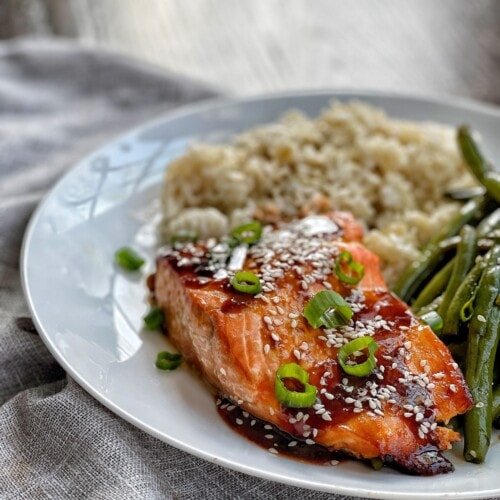 ** Calories above are for the marinade and glaze only.  Salmon not included. WW Points (marinade and glaze only): Salmon varies greatly in calories and points based on the variety you use (organic, wild caught, farm-raised, etc).  So, I have included the stats for the "extras" of this recipe, and you'll just need to include the stats for the specific salmon used. WW PersonalPoints™: Click here to track this recipe in the WW app.