Lightened up recipes right to your inbox! Sign up here
Home / Course / Side Dish / Tomato and Cheese Stuffed Artichokes 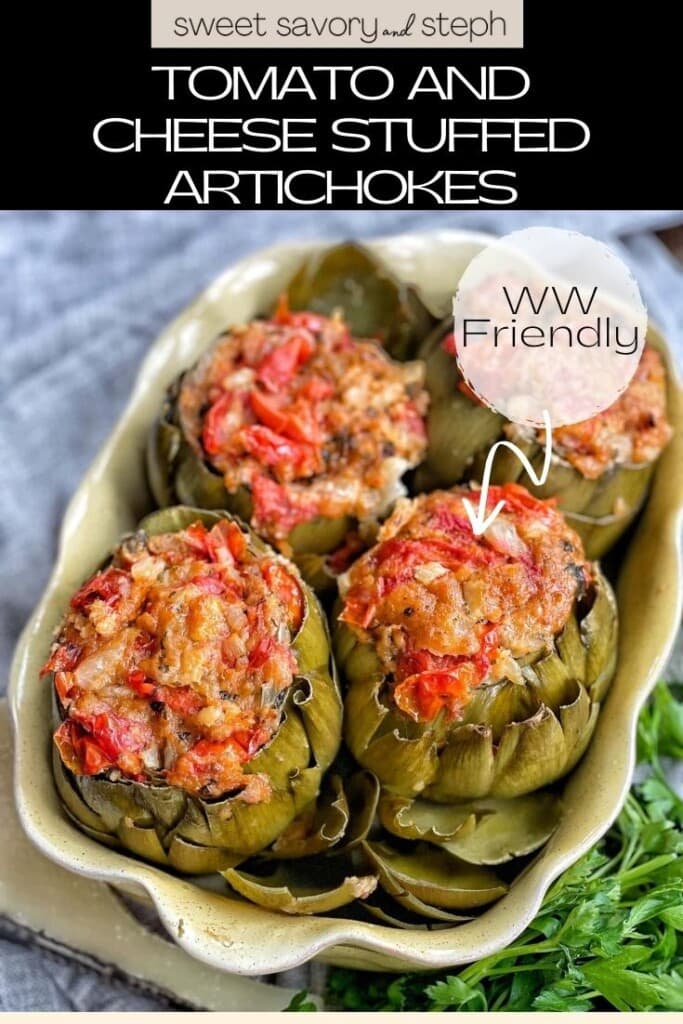 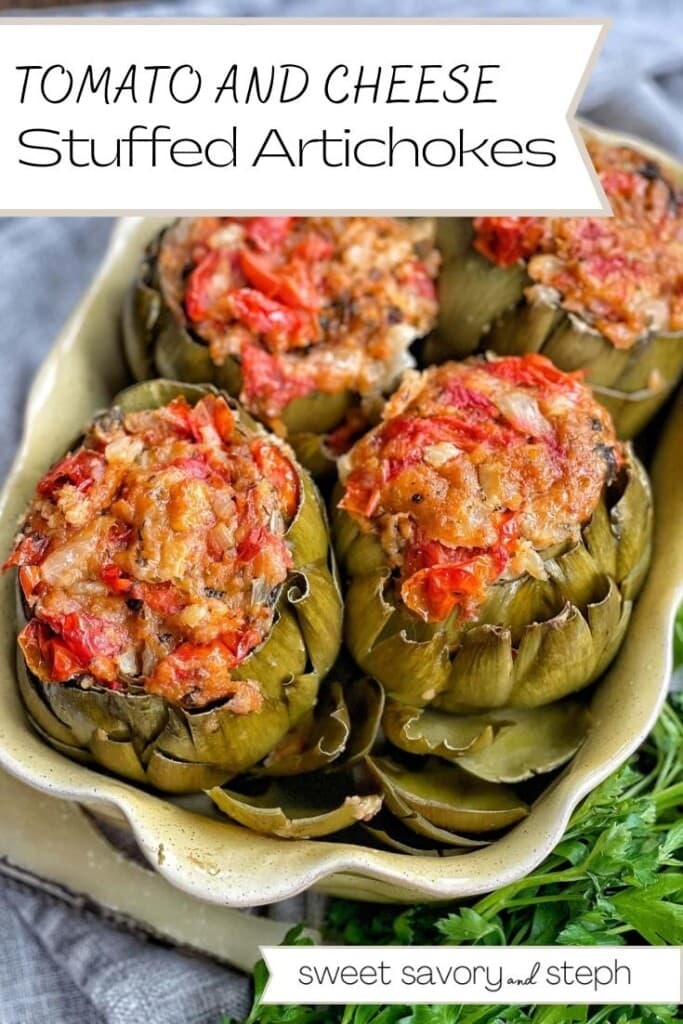 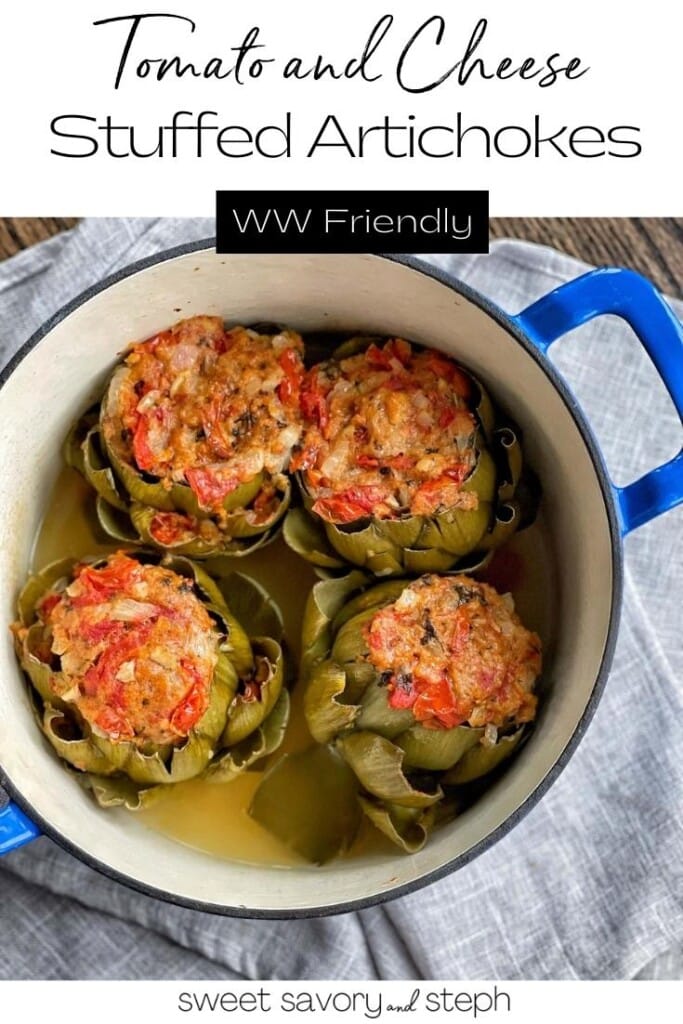 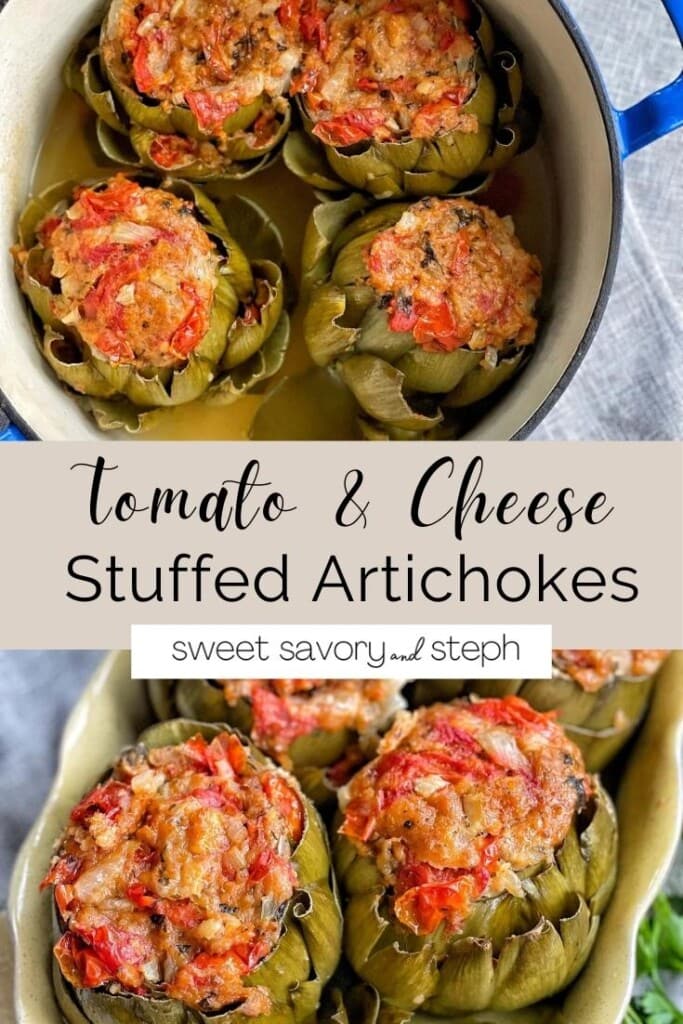 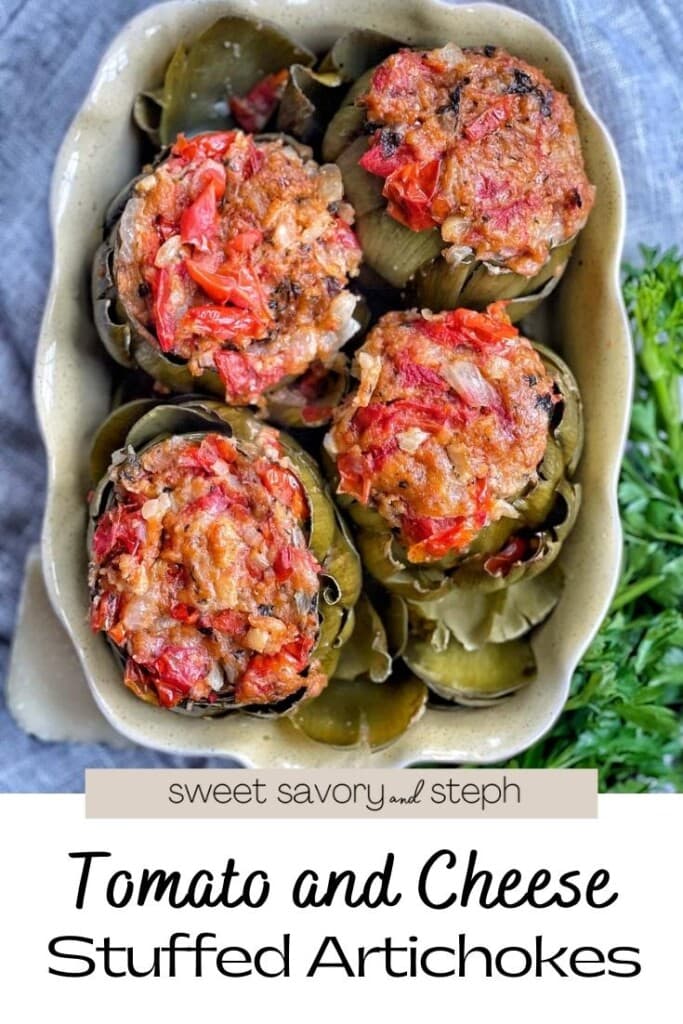 Stuffed artichokes are a staple on many tables around the holidays; they’re delicious, and fun to share with others. They also make for a great vegetarian meal. My tomato and cheese stuffed artichokes are stuffed with a mixture of breadcrumbs, fresh herbs, cheese, and cooked cherry tomatoes and onion; they are steamed in a Dutch Oven filled with flavorful broth for the perfect, tender bite. 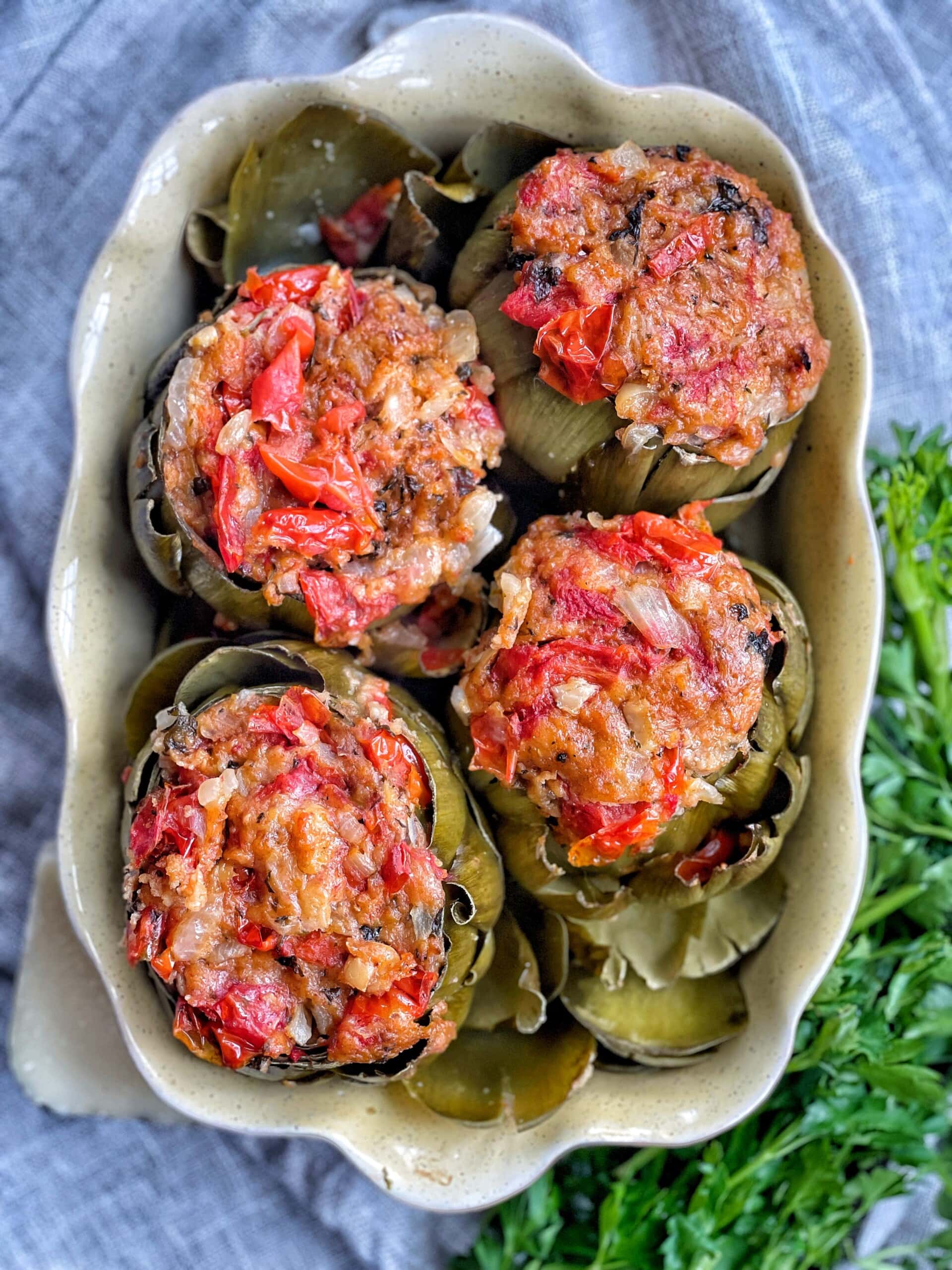 How to pick the right artichoke

If you follow me on Instagram, you’ll know that this recipe for tomato and cheese stuffed artichokes took two attempts to get right.  The stuffing was always delicious, and I didn’t change that during the second round (I’ll get to that later).  The problem in the first round was the artichokes themselves.

The artichokes I chose initially were HUGE. I guess I had in my head that “the bigger, the better.” But they also weren’t quite “ready.”  I ended up cooking them for two whole hours, and the leaves were falling off (indicating that they were cooked), but they never got tender or had any meat on them.

How to prep the artichokes for stuffing

When I am ready to make the artichokes, I prep them first.  To prep them, I cut the stem off, leaving about 1/4″ flat stem for the artichoke to sit on.  I also trim about 1″ off the top, using a serrated knife (it’s not an easy cut).  This leaves the top of the artichokes nice and flat, easy to fan out and stuff later on.

The next step is to snip the leaves of the artichoke.  I use my kitchen shears to trim them, so instead of being pointy, they are flat also.

Once this is all done, I fill a large mixing bowl with some water, and throw the artichokes in there to soak.  I soak them for half an hour.  I believe this was another key to the recipe being successful the second time.  Soaking the artichokes allowed them to soften up a bit. 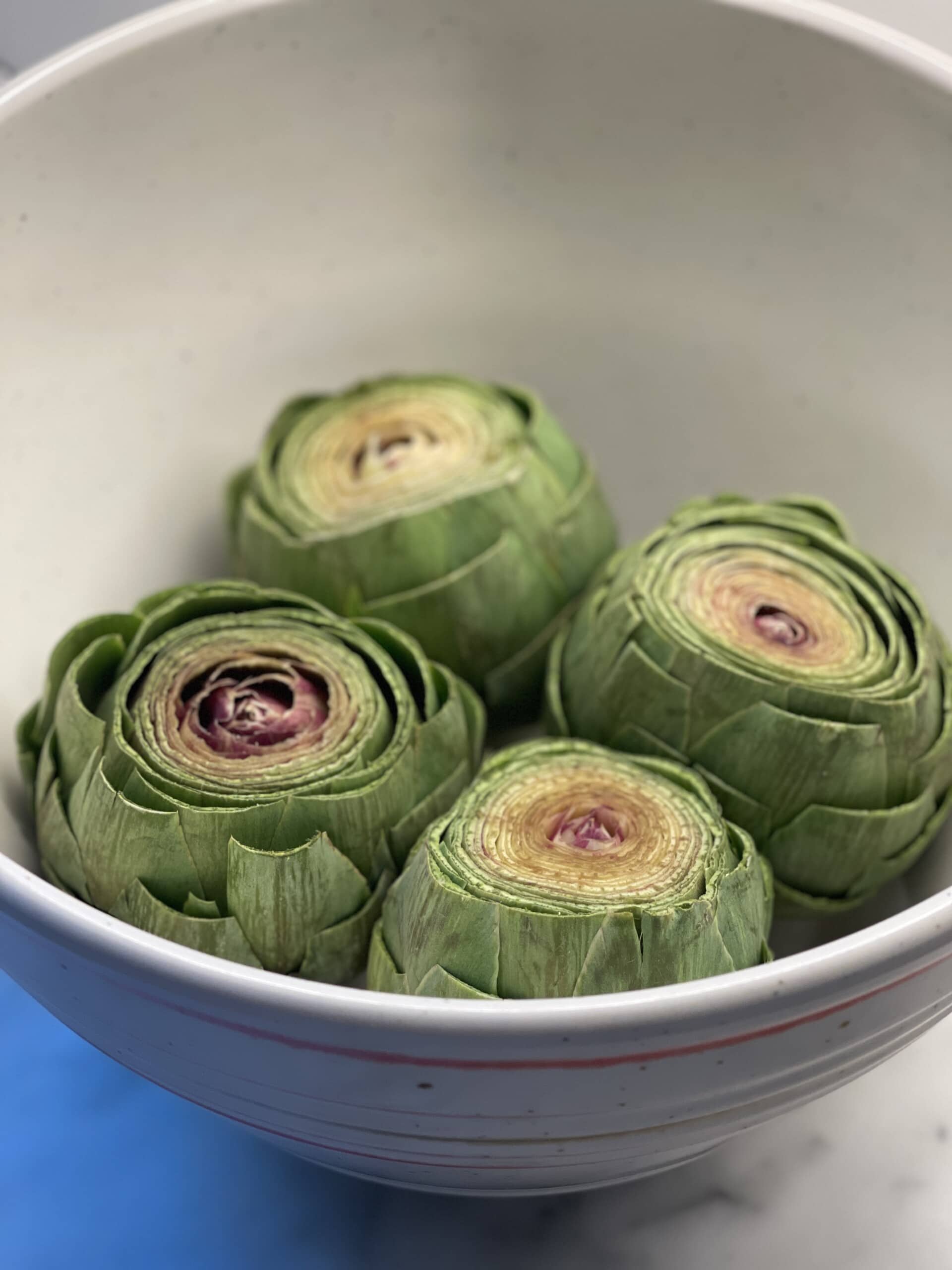 How to make the tomato and cheese stuffing

In a frying pan over medium heat, add some olive oil spray, and add the onions and tomatoes with the salt.  Cook this mixture for 10 minutes.  The tomatoes will burst and release some of their juices, creating a nice moist mixture.  After 10 minutes, add the garlic and cook for one minute.

In a small bowl, combine the breadcrumbs, cheese, and fresh herbs.  Then, add that mixture right into the tomato mixture, stirring to combine.  The mixture will have the texture of wet sand.

How to stuff and cook the artichokes

Spread the artichoke out as much as possible, using your thumbs to separate the leaves from the center and creating a crevice for stuffing.  It won’t be the easiest task, and it might be messy.  Since the mixture is nice and moist, you can scoop it up with your hand and press it firmly into the top of the artichokes.

I cooked these artichokes in a Dutch oven.  If you don’t have one, any large pot will do, but you will then have to transfer them into a baking dish for later on.  The Dutch oven allows you to do this all in one pot.

Place the stuffed artichokes in the pot, making sure they are standing upright.

Combine 5 cups of water with 2 bouillon cubes to make a flavorful broth.  Pour the broth inside the Dutch oven.  The water should reach about halfway up the artichokes.

Put the Dutch oven over a flame and bring the water to a boil.  Once boiling, reduce to medium low and simmer for one hour. 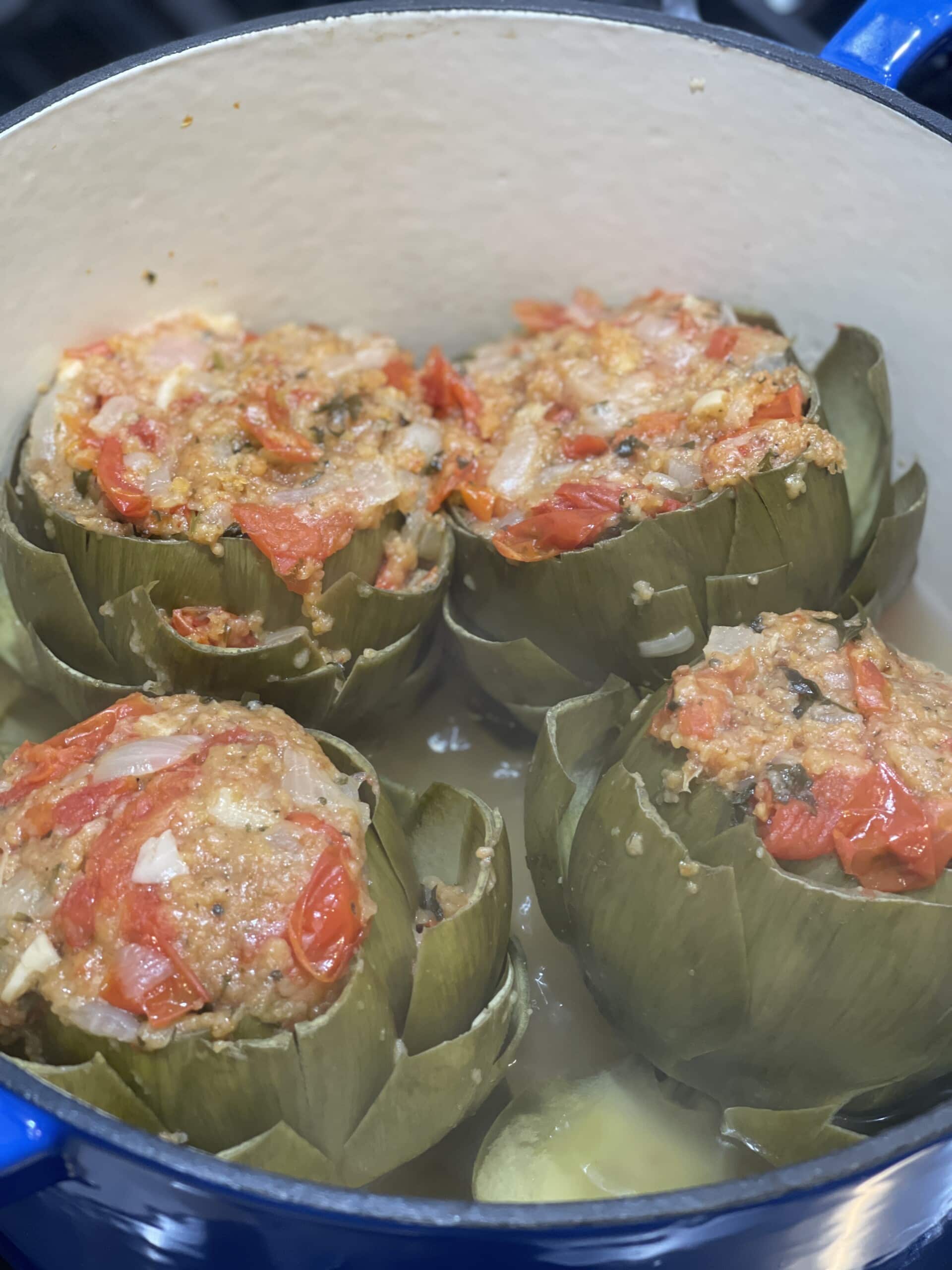 After an hour, they should look like this.  You can check to see if the artichokes are cooked earlier on (about 45 minutes in) by removing a leaf.  If it falls off easily, they are probably fully cooked.

At this point, I place the Dutch oven, uncovered, into a preheated 400F oven for 15 minutes, just to get some color on the tops. 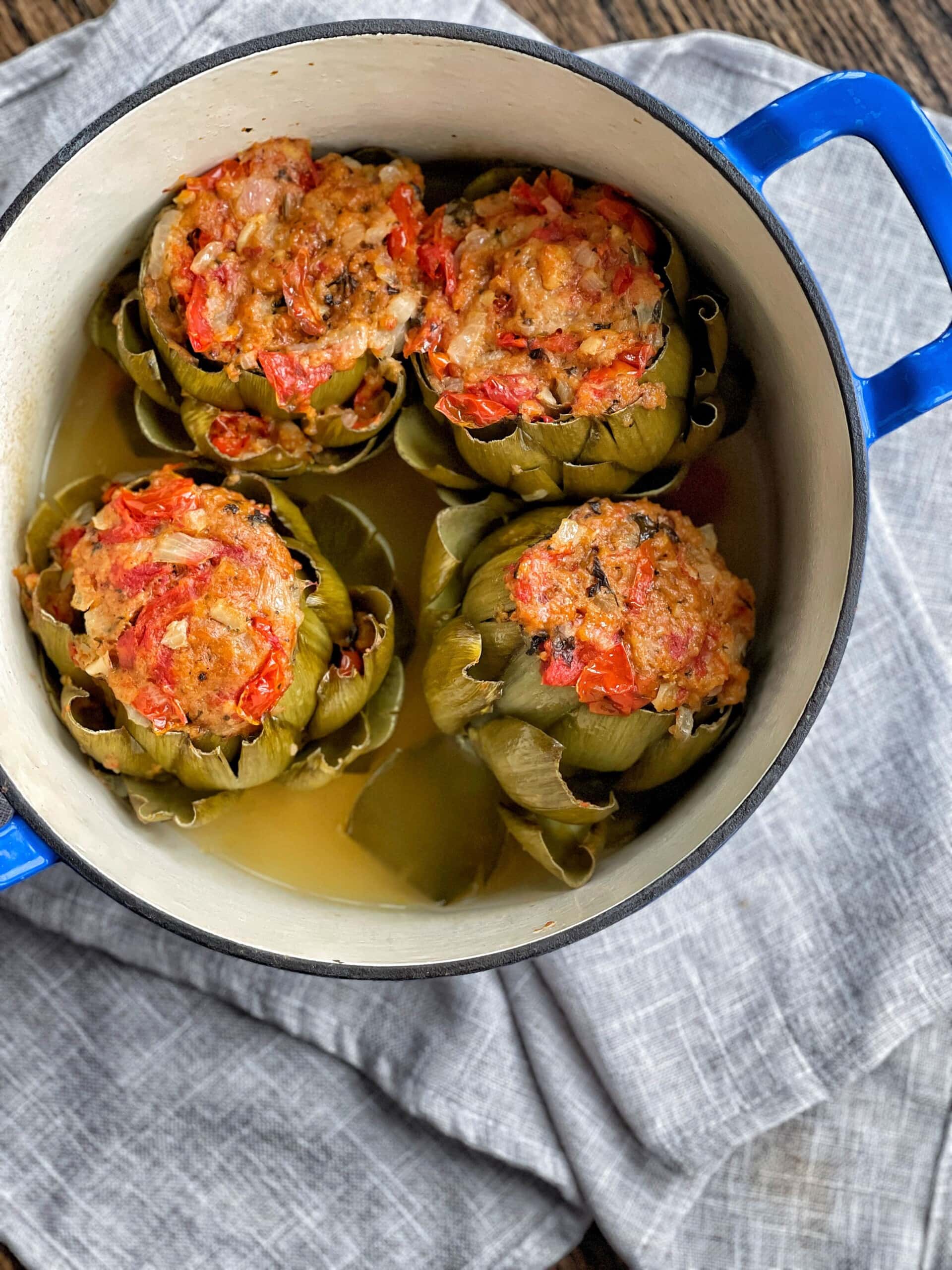 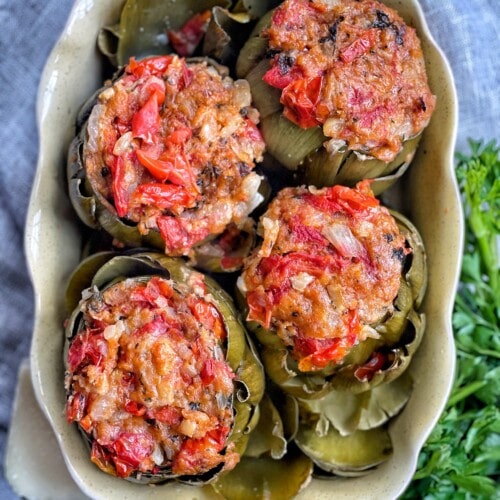 Stuffing and Cooking the Artichokes 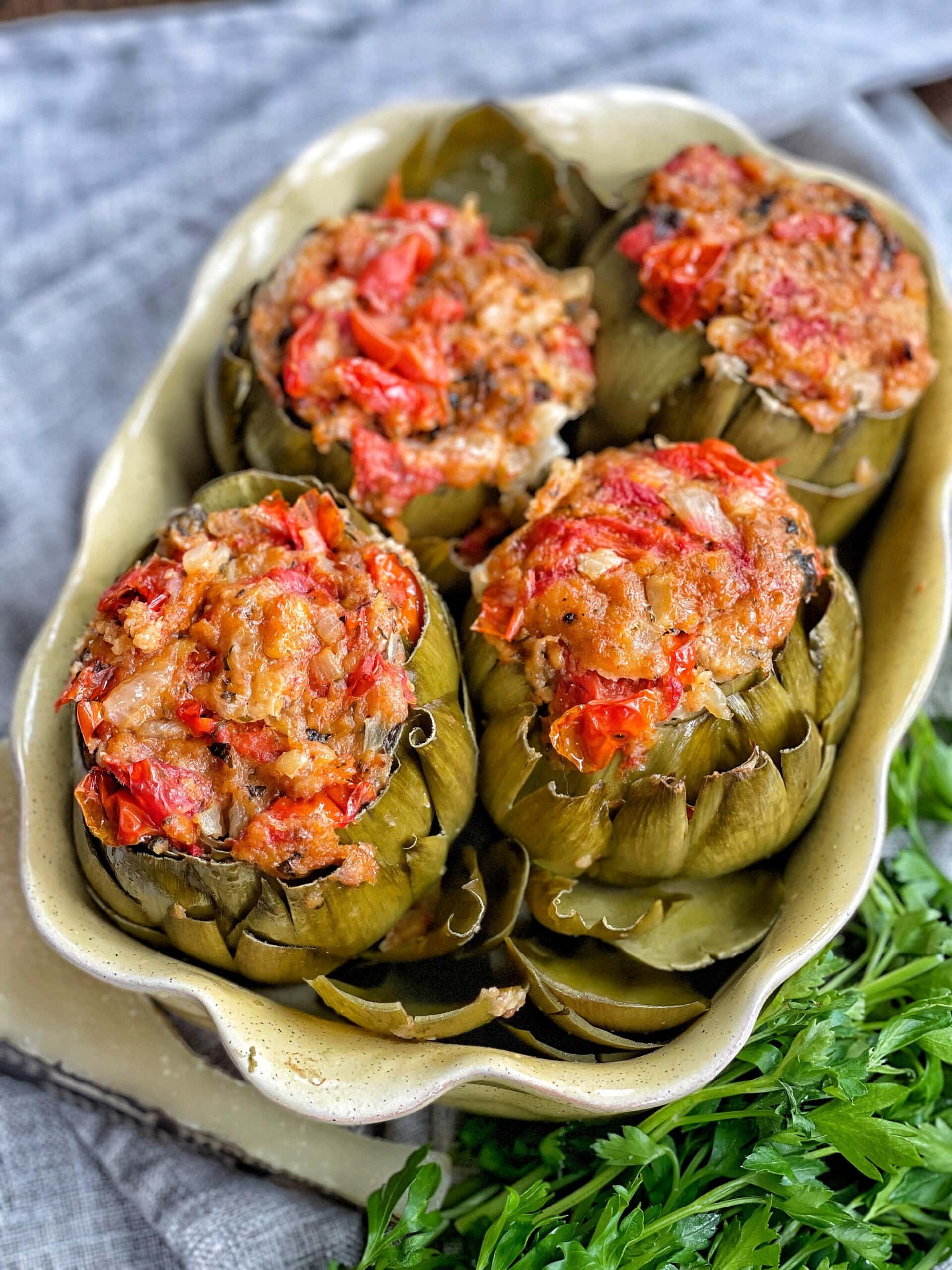